In the wild, rabbits are preyed on by several animals. Rabbits need plenty of self-preservation tactics to stay alive. Aside from running and fighting, a rabbit may play dead to avoid an attack. Playing dead renders the rabbit’s body lifeless, thus less enticing for a would-be attacker.

It is common to see your pet rabbit mimic these same behaviors if stressed. A rabbit may play dead if it is placed in a frightening situation or unhappy with the treatment it is receiving. Other rabbit actions and behaviors, like exhaustion after playing and sleeping comfortably, are commonly confused with a rabbit playing dead as a means for protection.

When Will Rabbits Play Dead?

In the wild, rabbits will play dead when they are terrified, usually when predators are pursuing them. Playing dead will hopefully make the predator lose interest and stop the hunt. However, there are certain circumstances when you may notice your pet rabbit play dead at home.

It is common to see a small child mishandle a rabbit, and the rabbit suddenly goes limp. Usually, this happens when rough handling is involved or when the rabbit simply doesn’t want to be held. Playing dead is the rabbit telling the owner that it is panicked, scared, and unhappy with its treatment. Usually, once the rabbit is placed on the ground, it’ll spring back to life and happily hop away. It is essential to teach young children correctly how to handle and care for small and delicate animals like rabbits.

Other instances of playing dead may have to do with frightening situations in your home. Because a rabbit’s last resort for self-defense is to play dead, certain sounds or other animals in the home may be threatening your rabbit. These pets are highly prone to high-stress-induced cardiac arrest. If you notice your rabbit frequently playing dead, it is essential to identify the stressful trigger and remove it from the rabbit’s area.

What Does a Rabbit Do When Attacked?

Rabbits are savvy animals but are also prey animals in nature. A wild rabbit is an easy meal for several predators, including raccoons, birds of prey, foxes, and neighborhood cats and dogs. Rabbits will often find themselves under attack, so they need to have a defense strategy.

Although it may be common to hear that a rabbit will simply play dead to avoid an attack, this is often the very last tactic a rabbit will use. First, rabbits are prone to run away from the threat. These animals are incredibly fast and agile, often reaching 30 miles per hour. A rabbit can turn on a dime and usually out-maneuver larger animals hunting it.

As a next resort, rabbits can be fighters and stand against some of the most formidable predators. Rabbits can stand on their back legs and kick and box despite their small size. A rabbit’s sharp claws can scratch and cut at predators, making the rabbit a tough opponent. The sharp claws can also be used to dig into the ground to escape, another favorite tactic.

When running and fighting don’t work, or when a rabbit is trapped in a corner, the last resort will be to play dead. Often, this life-preserving tactic is triggered as a result of fear. Rabbits are prone to high-stress levels, and imminent attacks can trigger a death-like response. By playing dead and becoming lifeless, a rabbit hopes that a predator will lose interest and simply pass it by.

Unfortunately, playing dead is not always an effective strategy and is only used as a last resort. If fighting and running away don’t work, a rabbit has few options left. Playing dead renders the rabbit’s body completely lifeless. While some predators may no longer be interested in a dead rabbit, like a neighborhood dog, other predators who are scavengers may have easily found a quick meal. Foxes, for example, will routinely scavenge for their meals. Seeing a rabbit playing dead simply allows the fox to catch its dinner faster and easier. A rabbit playing dead is not always an effective strategy.

When Can Playing Dead Help?

When rabbits are terrified, they will often play dead to stay safe. Playing dead regularly could be dangerous, and many rabbits have been known to have a heart attack from fear while playing dead. There are, however, rare instances when playing dead may help a rabbit owner.

The act of trancing is something that rabbit owners can do as a last resort if they attempt to help their rabbit stay calm. Trancing involves flipping a rabbit on its back, allowing it to slip into a panicked trance effectively. While this act poses the risk of heart attack, the benefits often outweigh the risks in life or death situations. Trancing a rabbit is common practice if your rabbit has become injured in an emergency and your need to attend to a bleeding wound.

When trancing a rabbit, keeping a soft towel or blanket in your lap is vital. Cradle your rabbit and carefully position it onto its back in your lap. Your rabbit will be very scared at first, so it is crucial to keep a calm, soft voice and continually reassure your rabbit. Eventually, the rabbit will slip into a trance, allowing you to attend to your pet. Remember to work quickly and calmly, so you can wake your rabbit up safely.

Rabbits are incredibly distinctive animals, and many of their behaviors and traits are passed through several generations of rabbits. Playing dead is an instinct, and it turns out every age rabbit will know to play dead if they are attacked or scared. Although still used as a last resort for self-preservation, playing dead is commonly seen in baby rabbits as much as adult rabbits.

What Could Be Confused for Playing Dead?

A rabbit will usually play dead when terrified of a specific situation. The frightening circumstance could be anything from rough handling and play to a real threat from a dangerous predator. There are some instances, though, where playing dead is confused with other behaviors. Some common behaviors that are often confused with a rabbit playing dead include:

It is a common misnomer that rabbits will instantly resort to playing dead as a means to defend themselves against a predator in the wild. In reality, a rabbit’s incredible speed and ability to claw and fight will usually be the way a rabbit avoids predators. Rabbits will only play dead as a last resort, and often playing dead is induced by a high-stress reaction.

Pet rabbits will also play dead to let the owner know they are unhappy with how they are being treated or handled. Owners can use this stress reaction to their advantage in the case of a severe medical emergency. Putting your rabbit into a trance by flipping it on its back can make your rabbit pass out momentarily. Trancing can be a dangerous practice and should only be used for emergencies.

Many rodents like to chew and gnaw on wood and paper to help keep their teeth short. But where does gnawing end, and eating begin?

Bunny owners love their furry friends, but the poop they produce can become a problem. 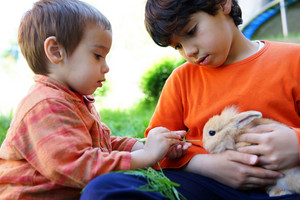 Rabbits should not eat aloe vera - learn the symptoms and more here...